I woke up a bit earlier than normal for a Saturday morning. There are children that live in the apartment above me. They usually wake up each morning laughing. I'm OK with that. It's a nice sound. Apparently Rebel and Napoleon like it as well. They shortly start looking for mischief as soon as they hear the laughter. So around 11h00, I decided I might as well start my day.

I looked outside and it was such a pretty picture. 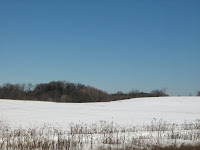 The sky was a great blue colour. I thought I might as well get outside for a bit.

I drove to my parents' house on the other side of Peterborough. It was a bit cooler over there, but still a very crisp and warmish day for winter. 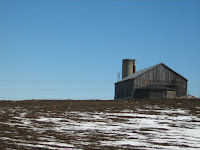 I enjoyed a nice afternoon with them. When I arrived home, I checked my emails and learned I had won a little prize from the Ravolympics. You remember that tank/tunic I knit? That was what was drawn for a prize. Pretty cool eh? So I had the opportunity to select a pattern for my prize. I'm not sure which one yet. When I do know, I will be sure to share that with you.

I also enjoyed a nice evening out yesterday after work. I went with a friend to see Shutter Island,directed by Scorsese. I enjoyed the film. There are a few twists in the plot. I find that I have enjoyed it more now that I have had time to process everything. I won't say anything more to avoid spoiling it for you all. If you want to chat about it, by all means message me and I will be more than happy to oblige. :)

I hope all of your week ends are going well. I'm off to look at more patterns. Have a great night!
Posted by Jocelynn at 10:09 PM No comments: Links to this post

I've been feeling very twitchy today. I'm not sure why. Every so often I just start to feel like something big is going to happen. Sometimes, a big thing does happen. Other times, the feeling passes and I continue on with my little life. I've been thinking though.....I need to do something. Anything really. I want to try and explore more. I want to go somewhere. I want to see things. Maybe I'll sign up for a course at one the colleges. I've always wanted to learn about something new. I've been looking at Sheridan's online course catalogue. There is an art course that has piqued my interest. Maybe, I'll try my hand at accounting. As you can see, I really have no rhyme or reason as to what direction I want to travel. I might even go down a separate path and try travel and tourism.
What will you all be doing this week end? Is there anything exciting happening in your neck of the woods? I need some inspiration to get off my butt and do something. Now, what to do......
Posted by Jocelynn at 4:57 PM No comments: Links to this post

I had to disturb my routine and wake up earlier today. The landlord needed all the vehicles out of the parking lot by 10h00 so the plow could remove all the snow. Now this might not seem early to you, but to a vampire, this is pretty freakin' early. So, since I was awake, I might as well run a few errands. The first on my list was coffee. No one likes me without coffee. I get scary. The second item was a trim. Not a cut, but a trim. My version of two inches and the lady who cut my hair, is quite different. 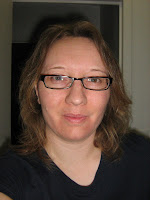 It is shorter than I am used to, but I do like it. She added quite a few layers. I must remember to use less shampoo. When it grows out a bit, I'll be able to do a bit more.

I also bought the usual groceries for my dinner.
A steak: 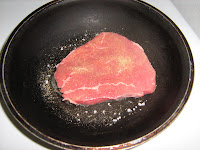 which I just pan fried it with salt and garlic powder. 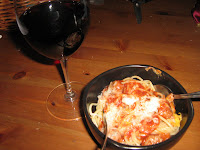 I chased it down with this: 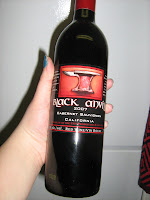 Now I'm off to watch a few episodes of Sanctuary and work on a few little projects. I hope you all had a wonderful week end.
Posted by Jocelynn at 6:50 PM No comments: Links to this post