That is the title of what I have been painting on and off for quite some time. 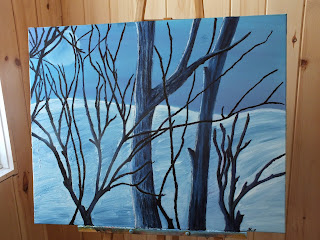 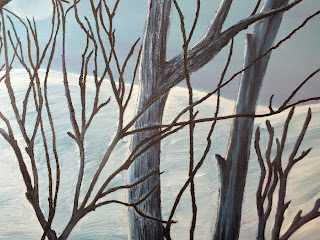 I like how it is progressing. I am not sure if it will be changed any further. 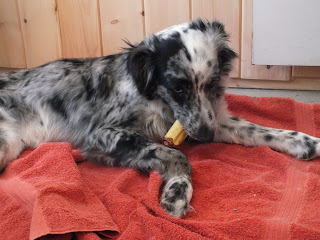 Note the chewy. I cannot leave her unsupervised for extended periods of time. Recall the cornflake incident? She seems quite content to hang out while I paint for a bit. We both win.
Posted by Jocelynn at 3:07 PM No comments: Links to this post

When Hubs arrived home the other day, he walked in on a huge party between the cats, dog and a lot of Cornflakes.
Apparently, Jackie has developed a thing for grain cereals.
Several days later, we are still finding those corny flakes in everything. I do mean everything! The sheets on the bed, the bag I take with me to work, tangled in the cat fur, everywhere!
That was way too much cleaning for one person to handle. This sent Hubs to his workshop to create some sort of system to keep the four legged children out of our kitchen cupboards. 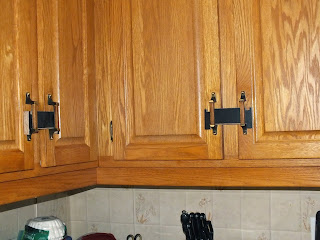 It may not be pretty, but it is effective, much to the disdain of Jackie. 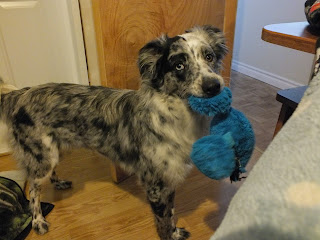 When she is angry, Jackie likes to grab that squeaky toy (which no longer squeaks) and shake it for all it's worth. Since the new security system was installed, she has been been trying to shake it off!

While all the commotion has been going on, I've been knitting my Simple Skype socks. 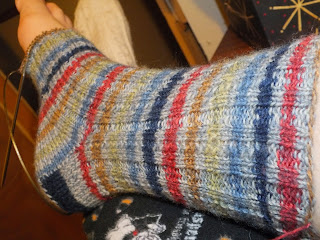 I have also been listening to a lot of Hozier. I love this song with Annie Lennox!


So begins another week. I hope you all have a good one!

Posted by Jocelynn at 8:56 PM No comments: Links to this post