I Survived Christmas of 2010

I have learned that The Fuzzies are not really good travel companions. Next time, I sedate them...maybe. They go into their carriers without a worry. The trouble starts when you start to pick up their carriers. That is when things get interesting. They screamed all the way down the downstairs; all the way outside to the truck and for the better part of an hour on the highway. I think they stopped because either their throats were sore or they finally realized we were not going to the vet. Either way, I was very thankful. You can only turn up the radio so loud to drown them out. I don't really like the stereo too loud because their have that incredible hearing. I can remember watching a documentary about cats and the part I remember most easily is they can hear the electricity in the walls.

Once we arrive at my parents, Napoleon lived up to the stereotype of being a black cat cellar dweller and went straight to the basement. Rebel made his way to the kitchen. That is where the two of them stayed for the better part of our trip. At night, Napoleon ventured upstairs and proceeded to eat most of Mom's plants. I guess he was roughing it.

With just the three of us humans, it was rather quiet. I rather enjoyed it, even if all we really watched was the news....24/7..for the first few days anyway. With their satellite system, they can watch the news across the country and comment on each provinces' local news stories. The weather was the most exciting. There was lots of flooding on the east coast and a few fires. When there were no more news programs to watch we watched CP24 and CNN. Did you know those channels show the same six stories and just loop them? I do now. :)

I finally was all newsed out and joined Napoleon in the basement. We watched a ton of movies. Miracle of 34th Street; Men With Brooms; It's a Wonderful Life; The Sound of Music; Pirates of the Caribbean; Surveillance; Nottinghill; and so many more. Wow that is a lot of movies. I had a difficult time sleeping so I knitted and watch movies. I completed a toque for Mom and finished the socks for Dad. I didn't bring my camera because of the flash trouble so I regret to say there are no pictures. You know it is rather strange. I refer to him as Dad when introducing him and mentioning him to other people, but in face to face conversations, I call him Len. I didn't create that name, Len is his name. I just noticed that. How strange. Anyway, I started another pair of socks for me. Nothing fancy. Just plain stocking stitch. I like the colour of the yarn. It is red and I suspect purple striped. That colourblind thing makes it a little difficult to differentiate between some colours. It's quite thick so I'm making the assumption they would be perfect winter lounging socks. Well you can see for yourself: 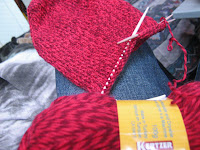 I always have a tricky time sleeping away from home unless I have had a few "beverages". Sleeping at Mom's is always interesting. First there is the battle of the thermostat. Mom prefers the house to be heated around 21 or 23 degrees. Dad likes it at a comfortable 27 or 30 degrees. Where I sleep in the basement you can hear the heater kicking on and going off at various stages in the battle. I believe the score by the end was Mom 10, Dad 25. I should have packed more T shirts. At least I remembered to pack my pillow. That helps. Next time I'm rigging something up for that futon. There is this bar that runs along the middle. If you land on top of it in your sleep, your back will scream all the next day. I had a difficult time keeping to one side. The Fuzzies kept pushing me around. Why is it the smallest critter takes up the most room?

Mom and Dad enjoyed their presents. I'm always a little worried about whether I chose properly. It's hard to shop for people who say they don't need anything. I like to think that after 30 years, I have finally got them pegged. The weather was awesome for driving. There were no freaky snow storms or onslaught of rain like in previous years. Just a blue sky, lots of sun and freezing cold. After the first hour it was quite enjoyable.

Now I have a day to myself. I'm going to wash my floors, make some soup and vegetate before I have to return to work tomorrow. I hope you all had a wonderful Christmas. :)
Posted by Jocelynn at 12:41 PM 3 comments: Links to this post