Believe it or not, I'm not as techie as I make myself out to be. I struggle big time when something goes wrong with my PC. I actually get very anxious and concerned that I might have done something so horrible that I lost my Internet. I spent the better part of yesterday and today trying to find my lost sound. My sound was working on all the Windows accessories, Itunes and Explorer, but not with Firefox. I was googling like crazy trying to find out how this happened and how I could fix it. Apparently my C drive was hanging out with a bad influence and became corrupted. That is where Firefox is hanging out. I tried that thing where you run a chkdsk but to no avail. I tried to restore my activities to a previous happier time, but my PC would have none of that. I shut down and restarted countless times. Nada. Then while I was in the shower, I had a brilliant idea! After all, I do most of my good thinking in the shower or while driving. Check for updates!! Lo and behold. I updated to the newest version of Firefox and once again I can hear all that is going on in the cyber world. Crisis taken care of.

Even Rebel was impressed: 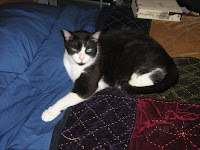 OK he's not really. actually he is rather annoyed I woke him from his twenty hour nap.

To celebrate my victory over the machine, I made my fried rice and hamburger dinner. Watched Van Helsing and worked on my painting: 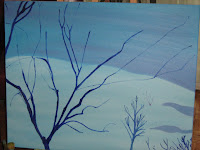 Now I'm going to brew some tea and revel in my victory. See you all later. :D
Posted by Jocelynn at 7:18 PM No comments: Links to this post