....and I am awake before noon. I have a theory that perhaps I just need less sleep. I am unsure as how much less. I went to be around 05h30 this morning and woke up around 09h00ish. I do feel rested though. I am looking forward to my week end. Maybe that is why I woke so uncharacteristically early. I don't really have big plans. I am going with a friend to see Alice in Wonderland. I really want to try that 3D effect. I'm working on another painting. I actually have a few on the go, but you can only work with oil for so long before it gets muddy. When I am satisfied with the progress, I will post the pics.
I also finished an idea for a halter top: 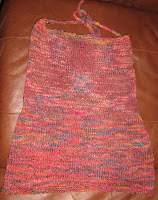 I am going to tweak it a bit. I'm not completely in agreement yet.

I was in a destroy mood last week end and spent the greater part frogging items I had no attachment towards. 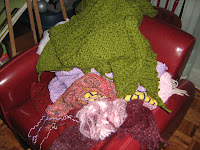 I came across this Colinette Giotto ribbon yarn and needed to do something with it. 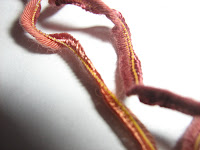 I made a tank top from it eons ago and was quite pleased with the effect. I thought I would try another spin on that creation.

It is probably a good thing my week end will be rained out. It will give a chance to put a few more things away and work on some indoor projects. It is rather gloomy outside. 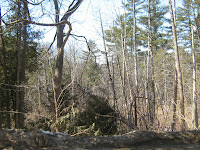 That little patch of the blue is the only blue in the sky. The rest is cloud covered. The snow is starting to melt and create some very awesome road conditions. As long as there is a bit of road for my tires to grab, it should be fun. This kind of weather is perfect for catching up on television shows and getting addicted to new ones.

I am not sure what sort of creation will come out of my kitchen. At the moment, I'm thinking Kraft dinner :P

I'm going to finish my coffee and organize a few items. I'll check back in with you all a little later. :D
Posted by Jocelynn at 11:48 AM No comments: Links to this post

More Adventures in the Kitchen

I now have another movie to add to my list of musicals I love. While I was waiting for my creation/concoction to cook, I watched Hairspray. I tend not to watch too many musicals. Too much sing-song, bursting into spontaneous dance that do not really fit with the story. So far my list of musicals I enjoy are Rocky Horror Picture Show, The Sound of Music and The Nightmare Before Christmas. Now I can add Hairspray!

Now about my little adventure in the kitchen.....
I think I'm beginning to get the hang of this.

This is what I started out with: 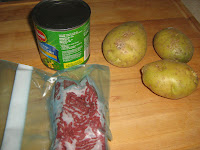 It merged to become this: 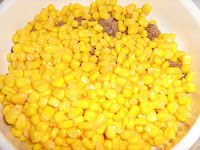 After a bit of mixing, this came about: 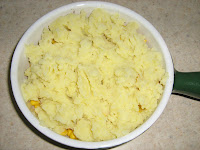 And with that new broil dial, this was the end of result: 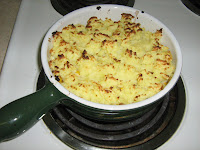 The fuzzy children are now sleepy from supervising me all day: 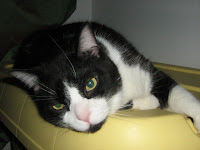 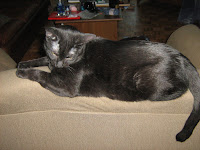 So I will give them a rest and retire to my room to watch more online Sanctuary and work on another little project. I trust you all had a great week end. Night everyone.
Posted by Jocelynn at 8:55 PM No comments: Links to this post