I had a great week end. I hope you all enjoyed yours. I visited my friend in the city. She got me hooked on television program named Raising the Bar. I just couldn't stop watching. The time passed so quickly. I'm really hoping the networks pick up this show for another season. I think my only complaint of the show is the length of Mark-Paul Gosselaar's character. As I'm now just reading this link, I see that there is actually a second season out there in television land. I think I will make that my mission for this month and track it down.

We visited Pick Up Sticks new location in Stoufville/New Market area. It is found in a wonderful piece of country.

Here are the goodies I came home with: 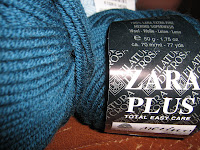 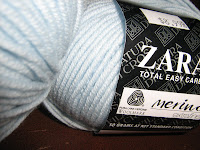 I see mittens in the immediate future with this happy combination. 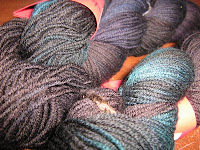 I love the subtle transition of the colours in this Alchemy product. I didn't even notice the purple until last night when I was really examining the skeins. Those should make exciting socks. 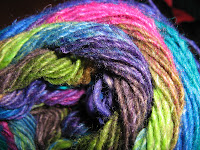 Since I had such a great time the Intrelac Socks the first time around, I thought I would give it another go. Its always such a surprise when you see the next colour emerge.

This is the beginning of my Skeleton Stockings:

They do not show the pattern yet, but they will soon. When it becomes more obvious, I will be sure to post pictures.

Lately, I've been cruising the Internet highway for things other than knit patterns and video games. Surprising, I know. Who knew there was a whole other world out there besides the cyber one. Anyway, I have stumbled on a few things that were pretty cool or just plain bizarre. For example, there is an ocean forming in the Ethiopian desert. Now how cool is that? We get to see a natural event in our lifetime. I'm not sure whether there will be an actual ocean there in our time, but just being able to see the start is pretty amazing.

Something else I stumbled across is that the children's television show Sesame Street is celebrating 40 years. This program has sparked a countless number of studies. It is one of the few that have stood the test of time and reached not just the North American children it initially targeted, but children world wide. I had no idea until I wrote a paper for one of my courses in university. I also learned that James Earl Jones was the first celebrity to guess star on the show. I must say, my favourite Sesame Street bit was when Ricky Gervais was doing an interview with Elmo. I did put that clip on this blog somewhere. In case you missed it the first time.........


And since I was snooping around Youtube, I now have a new favourite song:


I'm going to work on my scarf now. I will chat with you all a little later this week. :)
Posted by Jocelynn at 8:56 AM No comments: Links to this post