I have stumbled onto another world of addictions for myself. Its on Facebook. It's a very cool RPG (role playing game) called Elven Blood. You create a party; Do quests; Level up; Make Friends; Shop; and omg, so much more. I barely sleep as it. This is going to provide me with endless hours of stimulation. If anyone is already a part of that game and need new members to join their party, hook me up. I'll be glad to lend my services.
I have started the final sock in the Pentathlon group on Ravelry. I love it. When I first saw all the little charts and symbols, I was very hesitant. Once I dove in, it proved much easier than I could ever imagine, (and I have a very vivid imagination!). What else is super cool, is the author of the pattern was kind enough to provide photos of what the stitches were. I am very much a visual person, so this was a huge help.
Here is my progress so far: 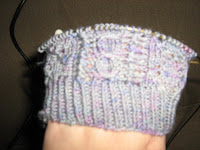 I have to be careful and mind my stitches. I was watching a movie called The Go-Getters, and found I had to re do a number of rows. If you haven't seen this movie, I think it would be one to look out for if you ever find yourself in the video store. Without trying to spoil if for you:
The main character steals a car from car wash where his friends works. He needs a set of wheels to find his half brother to give him the sad news that their mother has died. The owner of the car, ends up calling him on her cell phone. (It's in the car.) The develop a very odd relationship. Her conditions she provides him to follow are as follows: He telephones her and tells her of his adventure. She will be entertained and not report the car stolen. It's an odd little affair. Very fun to watch though.

Since is just teeming in rain today, we stayed in and did laundry. Since none of my articles are put into the dry for fear of shrinkage, everything is hanging from whatever bar would provide enough support. 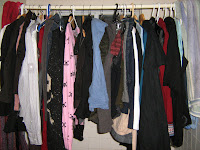 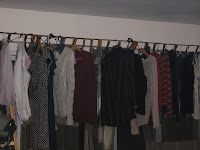 On one of my lunch hours this past week, I found myself once again in a yarn store. They were having a sale on sock yarn!!!!
I adopted these: 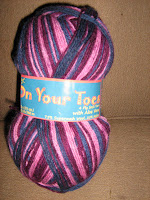 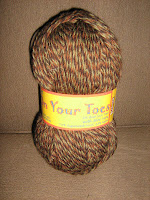 Not the clearest pics as I now see, but you get the idea.

Well I guess since I have shown my laundry and yarn, that is about all for now. I hope you all enjoy your week end!
Posted by Jocelynn at 5:38 PM No comments: Links to this post