I'm trying to get Hubby addicted to television. I think my plan is working. So far on our queue is American Horror Story, (holy crap for a television show is certainly is freaky), Sons of Anarchy, and Once Upon a Time. I'm also watching Grimm, which I think I will introduce to Hubs a little later. He really is not a big television guy. Over dinner tonight I learned he had no idea who The Beaver was.
I finished a pair of socks for little Miss last night. She put them on immediately which made me feel very good since the art of cool is sometimes very elusive. 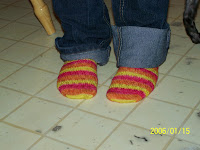 This afternoon I wanted to see what the big deal with making your own bread is all about. I do not have a bread maker nor do I have patience. I do however have access to the wonderful internet which helped me out huge. I located this recipe which made the most sense to me, for White Amish Bread. I must disclose at this point that my dough did in no way, shape or form resemble the picture. I then added some Italian seasoning, pepperoni and a lot of cheese. This is the result: 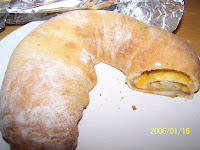 I'm going to watch a few episodes of Beauty and the Geek and work on another knit project. I hope you all have a wonderful night.
Posted by Jocelynn at 7:12 PM No comments: Links to this post