Hmmmmmmmmm
That is my word of the day I believe. Doesn't require much effort and I like the way it sounds.
Those internet folk are tricky with their sock cults.
They sucker you in with an easy peasy little sock pattern as the first task. Something you can do while watching television. It lulls you into a fake sense of security. Next thing you know, you anxiously await the next challenge. You can do this you think to yourself. You are a lean mean knitting machine. Bring on the next challenge! you roar. So they do. You finally find the pattern after long waits by the pc, wondering if they meant your time zone or something else not of this world. The pattern finally reveals itself. Hmmmmmmmmmm
There are a lot of symbols on this one.
OK. Don't panic. I'm sure it is not as tricky as it looks.
Just go with it. Think of it like good anime. The plot never really becomes understood until the final frame. 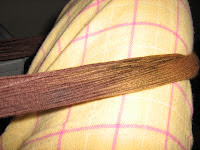 Yep. Them there are my snazzy pj's. (and a bit of my foot). What the cool kids wear when they are home sick. 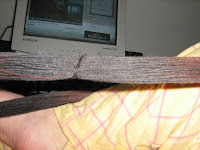 So after four hours of serious study, this is what has emerged: 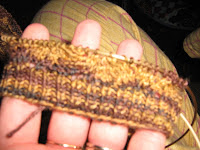 Just stick with it. I'm sure it is do-able. It is knitting for goodness sakes. Not like it's rocket science. Thank goodness for you, seeing as you had to repeat the scary math lessons for a victory lap in high school.

Which I think is most excellent seeing as how my head is ironically captured by the weather outside: 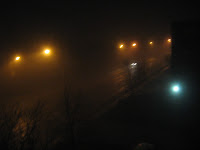 Thank you to Alanis. I now no longer understood the proper meaning of the word ironic. Isn't it ironic.................I have no idea. I'm chasing Nyquill with rye and hoping for some sleep tonight. I remember this study I read in school a very long time ago in a planet not so much like our own, where they said that the neurons need to charge or you will die. The experiment was scary involving a cat, an overturn bucket and some water. Even with the tiniest bit of sleep, it is enough for the neurons to continue. With no sleep whatsoever, things become disasterous. Please PETA don't hunt me down. I simply read about the experiment. I did not preform it.

This is what else I managed to accomplish today: 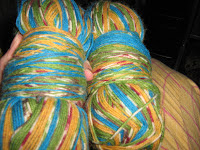 They were the two socks on two circs that I was so proud of. I have a better plan now. Soon to be revealed.................Later. When I'm not hypped up on cold meds and rye.
Have a good night everyone. I'm off to enjoy the colours.
Posted by Jocelynn at 1:07 AM No comments: Links to this post

Finally! My Jacobeans are complete! 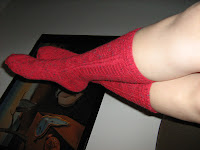 I spent the entire week end on them. This was probably a good move for the bank account as I was trapped in front of my television as opposed to being in a mall.
They look more like knee socks. I'm OK with that image. A sock is a sock. I was a bit sidetracked. I was watching a lot of cool movies and I forgot to look down to look at my project. Last night was the kicker. I was watching Constantine with my creative assisstant: 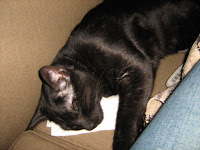 He did not fare as well. 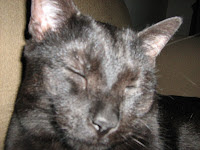 What does that say about my sleep habits?
I can outlast a nocturnal creature. 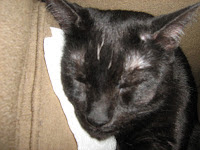 Napoleon is actually still resting. I guess he can't keep up with the late hours.

I am actually going to try and rest tonight. I believe I have caught hubby's cold. How does that saying go? A family that shares........

I keep saying we don't have to share everything.
Have a good night all.
Posted by Jocelynn at 11:25 PM No comments: Links to this post