We scrubbed and sprayed and then scrubbed some more. We have finally completed battle of the fleas 2013.
For Now....
Two weeks from now, we do more scrubbing.
Friday, early afternoon, my patio furniture arrived.
I am thrilled.
It looks like something out of a magazine.
Friday we went to the pet shop where there is a guru for all things in the pet department.
We brought home our arsenal.
We have used the products from Zodiac before and found them quite effective.
So as I said before, Friday night, we vacuumed and bleached everything and everywhere the cats tread.
They manage to explore a lot of places. 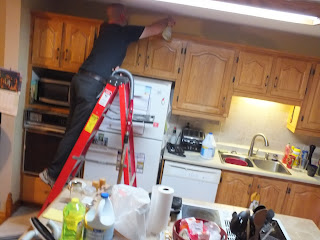 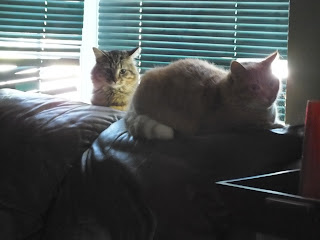 We thought we would try the spray this time around because it does sound easier.
Napoleon we bathed first, then sprayed. 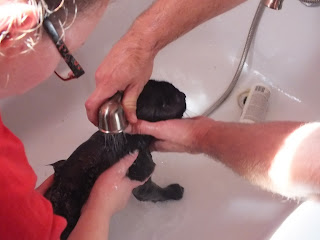 Napoleon actually tolerated the bath really well. Usually it sounds like we are ripping off his little arms.

Reno was the most receptive to the spray. 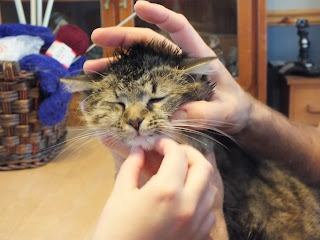 My only complaint is that the spray takes a lot longer than the shampoo. This is no problem if you animals like Reno that will sit there for as long as needed, but, when you have an animal like Rebel, that is another story altogether. 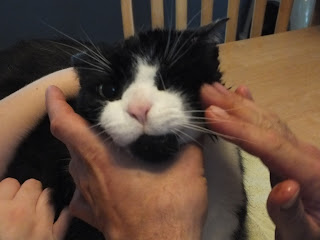 He tolerated the spray treatment for all of a minute.
Then he makes really scary sounds and our little photographer went outside to hang out on the patio.

We don't even have photos of Tom because we were covered in too much fur to touch anything let alone a camera.
We were lucky with the ferret.
Not one itty bitty flea on the little girl.

After everyone is treated, we all go outside with Hubs uses the flea spray to kill off the rest of the nuisances.
It must have looked funny to the neighbours. We were eating outside to kill some time and even had the fish out there.
We take eating together as a family really seriously. 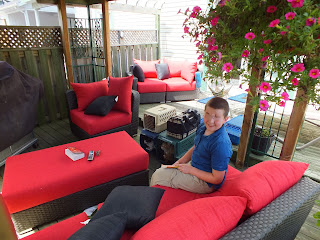 Bluette the Beta is behind one of the chairs in a shady spot.
I learned in another lifetime that Betas are not supposed to be in direct sunlight. 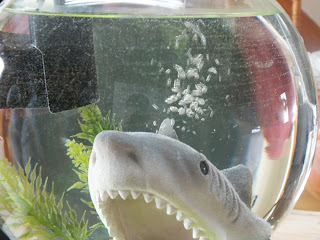 That is Bleutte in his actual habitat.
I swear he really is in there.... somewhere...

Sunday we applied a topical applicator that goes just at the base of their skull, back of their head. It makes their hair all spikey, but it is really effective.
In two weeks from now, we will vacuum, bleach and put that topical applicator all over again.
Right now we are all going to relax in a nice cool corner, watch a little tele, knit and veg! 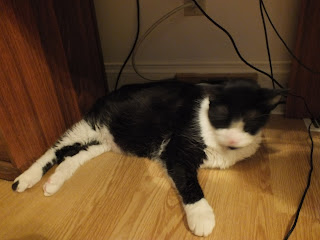 Posted by Jocelynn at 9:49 AM No comments: Links to this post