Getting My Geek on at JoeCon 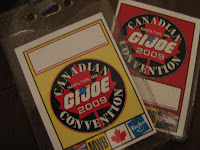 This week end was awesome. I actually left my comfortable surroundings and ventured into Hamilton. Husband had heard an announcement on the radio for a convention about G. I. Joes. I'm not sure if you can recall or not, but there was a cartoon in the 80s along with a long sting of comic books dating back from around 1942. I was not really sure what to expect. I had never attended anything like this before. I had gone to many knitting conventions, but I could always pretty much guess on who would attend such an event. This was out of my realm.

Here are a few of the pics I had taken: 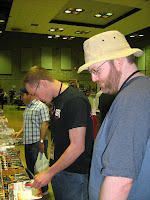 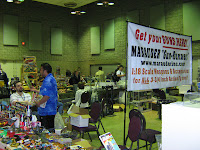 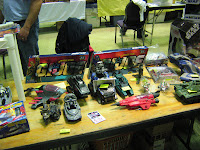 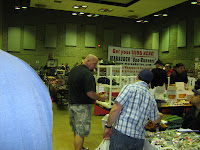 Those of you who know me, know I can't ever just browse. I came home with a few things myself: 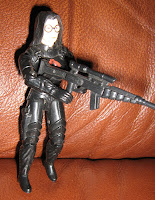 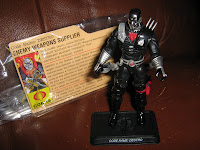 I will let you know that I did find it an interesting event. I'm not sure whether I would attend again. Who knows? I never actually thought I would have visited such an amusement to start. :)

Later that day we went to see X-Men Origins: Wolverine. I love those types of movies. For those of you who are die hard fans of the comic, do not compare the two. I would strongly suggest you take it as a movie and not base it on the comics or cartoon. That aside, I loved this movie. It kept up a very good pace. It had that humour I love about the Wolverine character. That is all I would ever ask of an action movie based on a comic book. They are separate mediums, each with their own merits and disadvantages. I even loved Ryan Renolds character. I heard a lot of negative things about Renolds portraying an action character. But I really liked him in Blade. I'm also a bit bias because I love Canadians actors.

Sunday we went to Husband's grandparents 60th wedding anniversary. That number alone is something hard to imagine. you only get 25 to life for imprisonment in Canada :P. It was quite the adventure to get to the event. There was an horrible accident on the 401. Apparently, a motorcyclist had tried to move through the transport. It was not successful. Since I had about three hours to kill while waiting in the parking lot, I just started to think about things. For instance, that motorcyclists had no idea what today would bring. He woke up. Probably did his morning ritual. Might have been coffee, reading the paper, surfing the net....who knows. Now he is lying in a hospital bed somewhere and will never be the same. He had his legs amputated. All the things he loved doing will never be done as they were again. So I guess the lesson learned is to take your time. We are only treading on this surface for a very short time. We might as well enjoy it to the best of our capabilities.
Alright then, enough serious thought for the time being. I'm off to work on my tank and watch In Treatment. Hopefully by the time my vampire hours start, World of Warcraft would have finished downloading. It has only been about 72 hours so far. :P
I hope you all had a pleasant Monday :)
Posted by Jocelynn at 7:13 PM No comments: Links to this post