Cat In The Bag

I hope everyone is enjoying the summer weather. Where I live, we have finally had more than four days in a row without rain. The cats however, are not as thrilled.

Rebel has resigned himself to the heat. 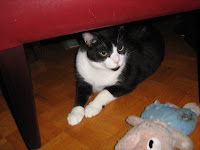 He has now experienced the summer season for 9 years. He just finds a nice dark place to hole up in and waits for night time to plan his escape to the balcony.

Napoleon on the other hand, is quite upset.

That is one angry kitty.

He roams around the apartment screaming until he finally tuckers himself out and he rests inside whatever bag is lying on the floor. 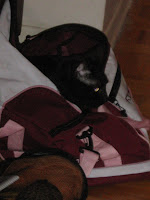 We made it to Wonderland on Sunday. We had a great time. Unfortunately, we did not hit all the rides we had planned. We did however get soaked on a few of them. My sneakers will never be the same. Wonderland is a great place to people watch. Everyone in various outfits, or lack of. Surprisingly, there really wasn't that many in attendance. I wonder if the heat played a part.

I went to the gym tonight. I have been slacking for a month now. At the end of our normal routine, Husband showed me how to do a bit of boxing. I think I was picturing work for most of the shots. It was a great stress relief. I hope I can move my arms tomorrow.

I'm addicted to Farmville on Facebook. That sort of taken me by surprise. I was avoiding that game since it had been developed. Sorry to say, but it looked rather silly. Now I am right into it. I was a bit concerned with a few of the details. There is a point in the game when you can harvest the fruits of your labour. I was okay with harvesting the veggies and fruit. I was worried about harvesting some of the animals, especially since it looks like you harvest them with a scythe. I'm happy to report that if you can't milk the creature, you harvest the wool!! How cool is that?

Anyways, I'm off to harvest more things. Have a great Wednesday.

I leave you with a little summer music:

Posted by Jocelynn at 10:44 PM No comments: Links to this post