I just want to say thank you. You are my best friend. I tell you absolutely everything. Perhaps too much sometimes :)
You make me feel strong. You make me feel like I can do anything. You know all my secrets. I know all of yours. There have been stressful difficult times, but they are hugely outweighed by all the cool experiences. I would never ever trade any of that away. You're stuck with me. :D
Posted by Jocelynn at 10:43 PM No comments: Links to this post

I was not really aware of that fact either. I just thought I would share the weirdness that is my family. I tried to preserve the moment, but Napoleon is rather quick on the uptake. 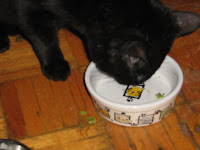 Sadly all that is left are crumbs. Does broccoli leave crumbs?


Rebel was on hand to explore what super cool things arrived in the mail on Friday. I finally penciled in some time to open the delights.
Lo and behold, 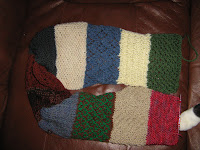 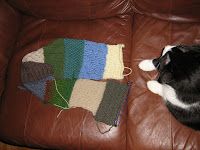 This delivery means that my scarf is starting the voyage home. I can't wait. Well, yes, I can. I have to. I can't very well hijack the post office vehicle. I will have to patient.

I have been working on a little sweater for a special little someone to be. This is called Baby Om created by Fawn Pea.
This is the front: 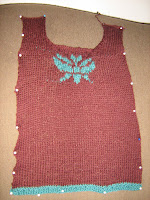 Here is a closer shot of the little symbol of a lotus in the center. 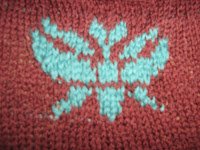 This is turning out quite well if I say so myself. And I do, so it is ;)

We watched some very good movies this week end. By good, I mean the stress of the week just melted away. First we watched Zack and Miri Make a Porno. Don't let the title freak you out. It was funny. It was written and directed by Kevin Smith. For those of you familiar with his works, this is pretty much along those awkward lines. A request from all of you, if anyone knows of existing patterns of the knit wear that the two main characters sported throughout the film, I would greatly appreciate a heads up to the right direction.
The other film we watched was The Gene Generation. A Sci-fi flick with a very hard core ass kicking female lead. I loved the boots the heroin wore throughout the film.

Also, (yes it was a busy week end at Chez L), we stumbled upon this little gem: 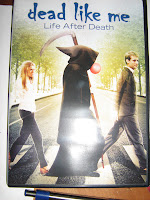 Was anyone else aware of a possible third season for Dead Like Me? I loved this show when it was on the air. I would schedule my life around this television show so I wouldn't miss any episodes. I won't spoil it for any other fans out there. I will say that I did enjoy this portion. It does however leave me feeling a little sad that no more will be following.

And what is a week end without a little wine: 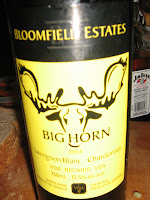 Most of the wine I select is based on the label. If it has an interesting image or cute character, I'm hooked. Sometimes my methods prove true. This is one such case. It went well with our chicken and veg tonight.

I didn't make it to the gym this week end, but I did manage to do 35 minutes on our elliptical here in the comfort of my home. It goes way better when I have something fast and upbeat moving through my headphones. Coincidentally, broccoli is apparently not enough to stave off Napoleon. 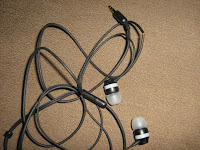 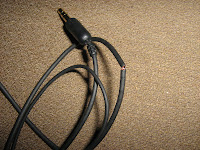 He will also devour wiring. Ergo the new addition for my ipod: 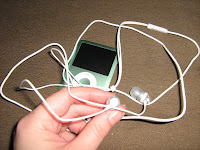 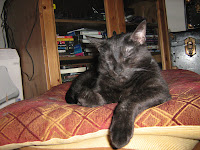 So while we settled for bed, I leave you with a tune that I cannot get out of my head. I don't actually mind this tune. It is catchier than the Mario Brothers Theme Song that I thought was taking up permanent residence all week. O_O.

Phenomenon by the Yeah Yeah Yeahs.

Posted by Jocelynn at 10:59 PM No comments: Links to this post