.........I introduced the boyfriend to my parents last week end. Maybe that is why it has taken me so long to write anything. I'm still trying to recuperate. On the way up to their house, he was wondering what he would say. I knew it would be interesting if he would be able to get a word in edgewise. I was not wrong. I think he may have said ten words, but don't hold me to that.
Poor fellow was bombarded by interesting by true facts. They politely opened the conversation with my step father staring at him and my Mom trying to explain a little about herself. I thought, ok, this is going well. This is what normal people talk about when they are getting to know each other. That lasted eight minutes. They switch topics to orthotic supports and took off their shoes to show what proper support should look like. They recommended who he needed to see should he require orthotic support at any point in his life.
Next topic of conversation was about neighbours. Good fences make good neighbours. My parents have a peeping tom neighbour that like hides behind their hedges in the backyard and well, peep. Part of me is hoping that is not true. The other part of me realizes that no one can make this stuff up and I just go with it.
That whole visit is really such a blur. I was quite nervous about everything. It's silly. I'm 30 something and still would like my parents approval at times. Dinner was excellent. It went rather smoothly. I am pleased.

I've been working on my Hitchhiker scarf. 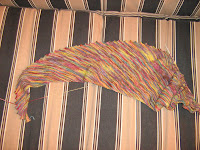 This is a closer look: 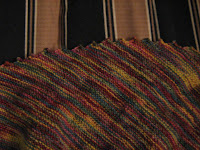 I've only been able to work on this scarf on my lunch hour so it is not going very quickly, but I am really enjoying the process.

I've been looking for a second job. I've been dropping off applications and filling out resumes for the past few weeks. I'd just like to try and get ahead for a little while. I'm surviving on what I make now, but I would like to be a comfier spot. So far it seems rather disappointing but I know that eventually, if I continue to drop off applications and resumes, something will come about.

Now I'm trying to drown the noises of my neighbours. The ones upstairs are fighting really loudly. The ones next door are getting busy. o_O
I think I'll just catch up on my remaining episodes of Fringe and turn up the volume a little louder.
Have a great week end everyone!