Been A Trying Week

I have not been feeling myself this week. I don't know who I've been, but it wasn't my main personality. It started with a very nasty cold last week end and went downhill from there. I haven't been to work all week. I've been literally floating around the apartment. The very nasty cold entered my ears on Tuesday and since then, I've been feeling surreal.
I did manage to catch up on all my shows. Being in a constant state of slow motion, allowed for such luxuries. It also allowed my wish list to get miles longer. I have caught up on all my episodes of True Blood. Now I am in want of the book series it was based on. I also caught up on Sancturary. Did you know it was first a series of webisodes? I had no idea such a thing existed. Now I have a whole new domain to conquer. Also caught up on Saving Grace, Weeds, Project Runway, America's Next Top Model. I may have a problem. Hello. My name is Jocelynn. I am addicted to television, and webvision, and reality shows, and and and.......

I have also completed one Ziggy sock. 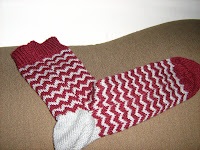 I have started the mate. I will have to go back to this one and re-knit the band. I have made much too tight and I can't fit the bloody thing over my ankle. If it wasn't part of the contest on Ravelry, I would tear it back now. Since it is, I will complete the second, then do a re-fit. Well that is my plan for now. It may change by the end of the second one. I may just fire them to the back of the closet and hope they never see the light of day again. Then I will get filled with remorse at my lack of love for them and take them out. Apologize profusely and then lovingly re-knit them so they can be worn as they should.

OK, enough with Cybil. My crack medical team has be on stand by all this week: 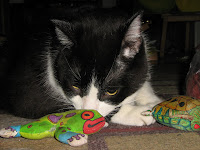 Rebel is just a bit annoyed that his little brother chomped clean through Turtle. That would be the object to our right. Froggy is still looking lickable. He has mounted a 24 hour surveillance on the premise while Napoleon rests from his hunt. 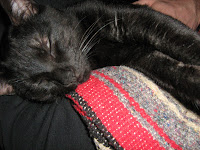 They definitely deserve some much needed R and R. Takes a whole Clowder to raise the dead.

I am very relieved I am feeling miles better. Tonight we are due to see Oktoberfist in Kitchener tonight. Husband has been looking forward to this even since he heard about it. We will be there with camera in hand to enjoy some great fights.
Hope you are all well. I wish you all a great week end.
Posted by Jocelynn at 1:06 PM No comments: Links to this post