Goes By Too Quickly!

There goes another Halloween celebration, tucked away in giant Rubbermaid containers. Until next year scary skeletons. You did a fantastic job scaring small children and quite a few parents.
We all had a fantastic time. Well not all. Jackie voiced her complaints quite loudly when tiny trick or treators came to the door. She unfortunately has to spend some alone time in our bathroom.
Jacob look fantastic in his demon watcher ensemble. 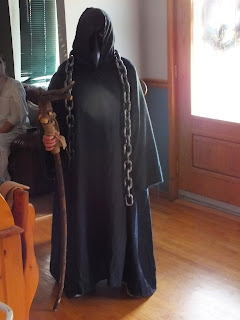 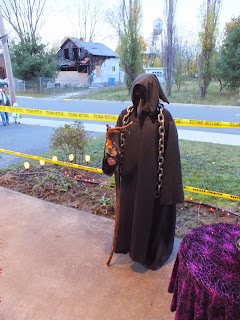 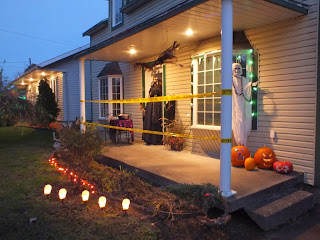 The one picture with the burnt house in the background? We had nothing to do with that. That was a nightmare situation from this past May.
A lot of people walked by Jacob thinking we had some really awesome decorations.

Speaking of awesome decoration,
this was Hubs' costume this year: 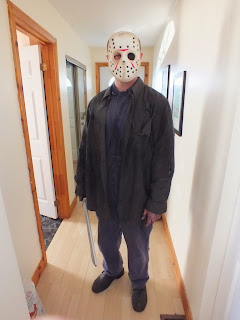 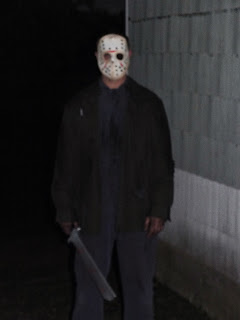 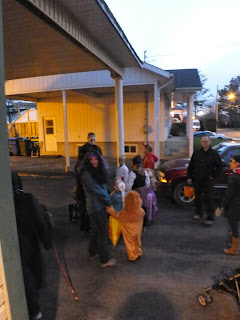 He was Jason Voorhees from The Friday the 13th series.

All I told the boys, were if anyone pees on the porch, they were in charge of clean up this year.

Last but not least, I was the Bride of Frankenstein! 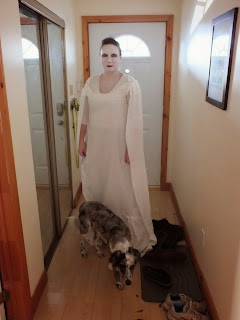 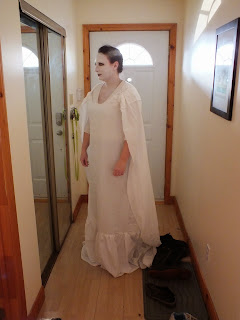 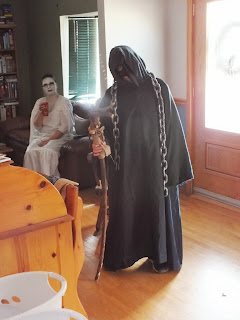 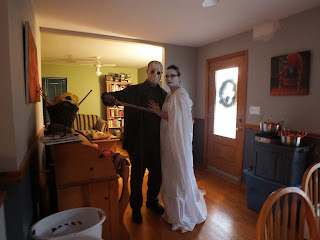 Who apparently hooked up with Jason, spawned a demon child and has a thing for hot beverages.

Around 19h00, things started to calm down. I thought it would be okay to let Jackie out of her confinement.
I was wrong.
At 19h10, there was one little princess almost finished for the night. We were the last house on her list.
I opened the door, exclaimed what a wonderful outfit and thanked her royal heinous for visiting our estate.
Then BOOM!
Jackie was out like the Flash.
It was just a blur of grey, white and black and took after so many trick or treators, you would have thought there was a herd of crazy puppies on the loose.
I threw was remained of my candy in the Princess' pumpkin head bucket, picked up my wedding gown and ran after the blur in my 5 inch heeled boots as well as I could.
Jackie has managed to make it to the end of the street and was on her forth lap back to the house when I finally caught up with her.
She returned victorious with a mouthful of raisinettes, (I certainly hope they were raisinettes), a yellow caution tape and a lot of glitter.
By the looks of it, Jackie also had a successful Halloween experience.
I am thinking, next year, she will be older and perhaps not so demonic.

After all that looting, she is finally tuckered out. 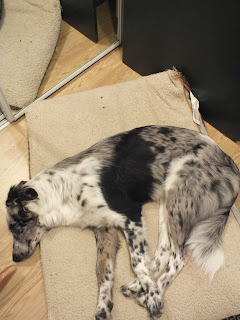 Now we brace ourselves for Christmas.
I hope you all have a great week.
I'm off to do the housework that should have probably been done weeks ago.
Have a good day!
Posted by Jocelynn at 10:20 AM No comments: Links to this post