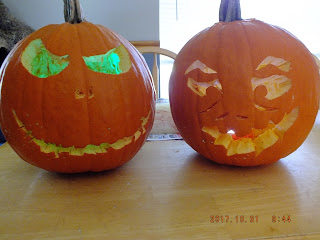 We had another successful Hallowe'en this year!
Part of the joy for me is to create something unique that you will not see another person wearing.
I believe I have passed on this thrill to my family members. 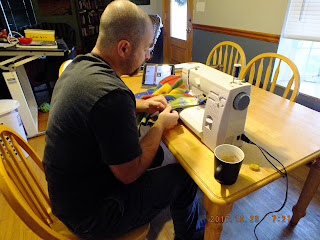 The very idea that you can make something out of string, or have lines on a page formulate another world is simply mind blowing!
You can take pride in the fact you did that with your own hands.

Little man got into the spirit of the event and made much of his own costume this year.
The only I did was knit his sweater. I made it large enough to fit over a winter coat.
The joys of Hallowe'en in Canada that have been plaguing mothers for decades. 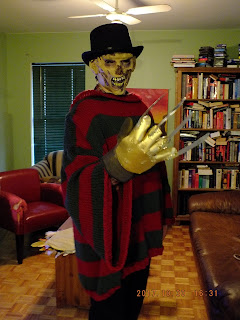 I think he did a great job!

Hubs was a mad butcher. 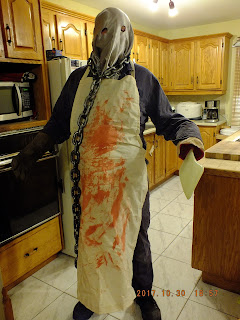 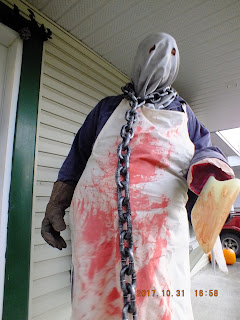 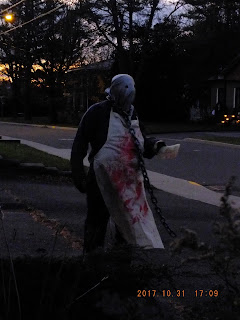 He was a big hit with the two to ten year old crowd. Not so much with the older trick or treaters.
I had to run after a lot of young people to give them candy. They refused to go by the scary guy.
At one point I had to rescue The Mad Butcher from mini hulk who claimed, I am not afraid of you! Then proceeded to drag The Butcher by his Chain! That little hulk received extra candy for his efforts.

I was a demented Fairy!
Heavy her head who wears the horns! 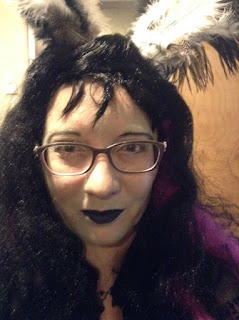 Those hons were getting heavy towards to the end of the night. I'll think have to think of something more light weight for upcoming years. 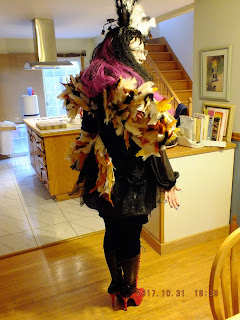 I will also invest in more feathers so I can cover both sides of my wings. 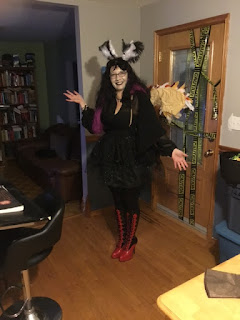 It truly was a fun night. I love how everyone gets dressed up. Everyone is a kid on Hallowe'en! That is why it is so magical.
I hope you are all well.
I finally see a break in the rain we have been having since the start of the month so, I am off for a quick walk with Jackie.
Talk with you all later.
Posted by Jocelynn at 8:41 AM 2 comments: Links to this post