On Saturday, we went to sparfest at the club where Hubby trains. He said he had a great time.

He does look really strong and well positioned when he fights. 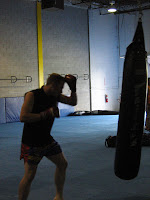 The end result would make you wonder though: 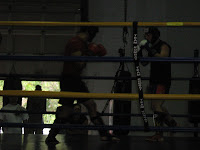 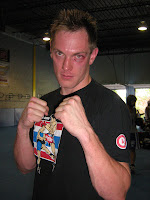 I finished my bits on the Traveling Scarves groups: 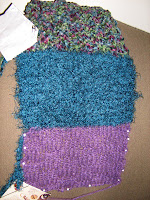 Mine is the purple. I did checker board type thing. It didn't show up on the camera as nicely as I would have hoped. 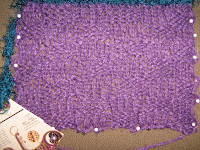 I am going to send them separately to the next person. I found it a scouch overwhelming to have both to contend with.

I like the overall look of the scarves. I would be pleased to receive these. My goal in adding my bits is try and make them look cohesive. I like the challenge.

I contributed the brown section on this one. I tried to do a basket type look. I like the effect. 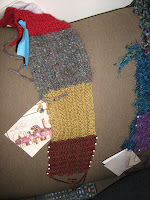 I had some trouble with this yarn. 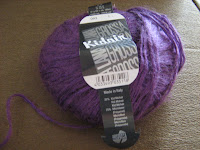 I love how it feels, but it splits super easy and I found myself constantly tinkering with it to make it straight again. I don't think I would select this one again to make anything large with. It is just too troublesome. 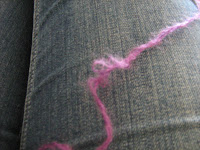 I love this one though: 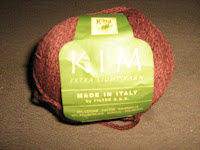 It feels very cool. Almost like rope. I wonder what sort of sweater this would make? 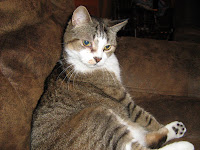 I also found some wool to make my SKP 2008 Pentathlon socks with: 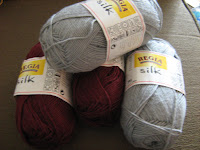 I will probably start those about mid week.

I also brought this ball home because it told me too: 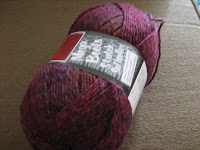 Always listen to the wool. Wool is your friend.

I also picked up the wool for my sock group at the local yarn store. 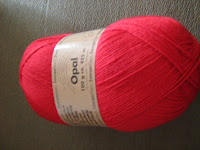 I think it may glow in the dark. I like different. Can you tell? hehe.


Here are some cool pics: 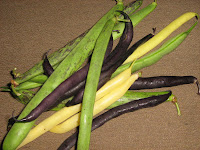 These are heirloom beans. That is why they are purple. I haven't tried them yet, but I hear good things about them.

Here are Hubby's long awaited Jalapeno peppers. They are all his. I cannot tolerate the heat. I think it would make a lovely painting though. 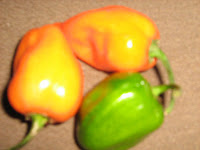 I was looking at the line up for television. I am a happy little camper. The new cycle of America's Next Top Model has started. I like the spin with the trans-gender Isis. I see that The Sarah O'Connor Chronicles will start tomorrow. The new show Fringe looks exciting. I am a bit disappointed that the last two shows of Flashpoint were repeats. I hope this is not a bad omen. Thank goodness for the internet. I get to catch up on all the other shows that will start up soon, House, Saving Grace, and Weeds. The ones I'm looking out for should be starting soon as well: The Big Bang Theory, Reaper, and Beauty and the Geek. My goodness, I love my television.
I think that about covers my week-end. I hope you all had some rest and are ready to tackle Monday. Good luck all. Sleep well.
Posted by Jocelynn at 11:17 PM No comments: Links to this post