We are all moving forward one day at a time. Each day, there is a little progress. Each day, there may be a few steps taken back. And you know? That is okay. We have a routine. We wake up. Take meds. Wash up. Have a little breakfast. Watch a film. Today was a really good day. I thought I would share. Today was the first day since my mother-in-law had her stroke, that a little of her shone through the haze. It was nice. I have learned a few things about myself as I devote most of my time to taking care of my mother-in-law. I can be patient. I have a lot I can teach someone. Routine is very important. I must also make sure to look after me. So, we take each day as it comes. We try our best. I hope you are all well! We will share again.
Posted by Jocelynn at 11:05 PM No comments:

We successfully moved Hubby's mother into our home. She has been here for a week and we are starting to develop a routine. She requires 24 hour care and I am pleased to say I can provide it for her. Hubs provides the physio that was lacking in the hospital. After having been knocked back to the mentality of a three year old as a result of her stroke, she is just now re-learning how to move her paralyzed foot. The stroke had taken away her entire right side. We have a long way to go but, progress is progress and we are pleased to see it. Currently, I am still working weekends at the nursing home. I really enjoy it and am hoping to continue even if onlh in a limited capacity. School is going well. I really detest group work. I did not enjoy it in high school and that feeling has not gone away. My brain seems to have accepted I require it to operate a little more abstractly. In all this new, I managed to complete a little painting for the Twitter Art Exhibit. I like this tradition. It gives me joy to create something that someone might enjoy. 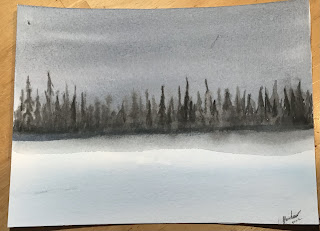 It is titled Cold Winter Night in Southern Quebec. I was inspired by the scenery on my drive home one night from work. There was a bit of a glow and everything had a blue tint. It was -20 Celcius but, felt peaceful. I also try to knit whenever I am able. These are called Swirl E. Socks by Prairie Girl Designs. It is a fun knit. 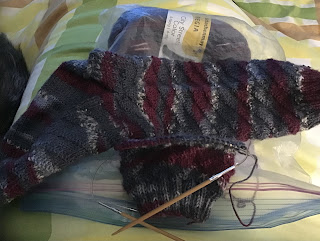 The yarn is City Streets Color by Regia. The colour change adds some interest to the sock. I am going to knit for a little while longer then call it a night. I hope you are all keeping well. Please take care of each other.
Posted by Jocelynn at 11:18 PM No comments:

Good Days and Not So Good Days

We have been keepong very busy. Our plan is to move my mother-in-law into our home a little after Christmas. It was not a decision entered into lightly. Our reasoning, based on what we have seen at her current location, is that we can do better. We can give her the one-on-one she needs to re-develope her motor skills. We can provide more active entertainment to enrich her life. We have the time. She needs the care. We can do this. So, we've been doing some renovation to make things more wheelchair accessible. 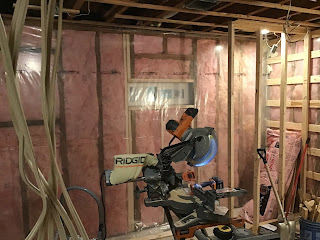 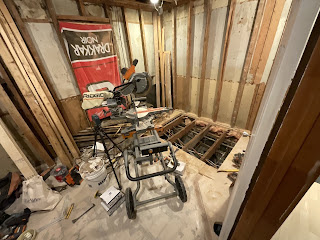 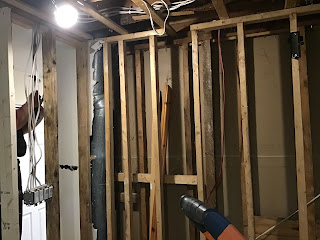 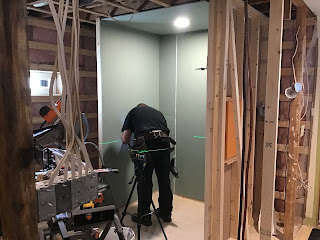 The old bathroom was completed gutted. Now Hubs is starting fresh with clean and safe materials. I've still been drawing and knitting. More of my focus is on school at the moment. Unfortunately we had to say goodbye to Napoleon. His hips just gave out the other morning. My decision process is to make sure my fuzzy children are not in pain. He was eating and drinking up to the end. His vision had long ago vanished but, he was managing. When he could no longer walk, my heart broke and we both it was time. The hardest part is him not being there. Napoleon had been with me for 19 years, enjoying hockey games, cuddling in whatever knitting project I had going, and just hanging out next to me when I was struggling with my homework. I really miss him. 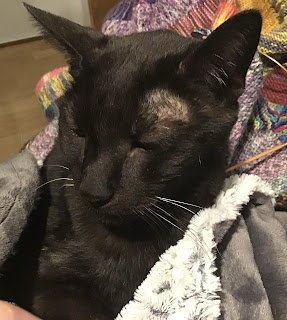 We are still enduring the pandemic. To be honest, I hadn't really thought it would last this long. To be fair, our lifestyle has not changed very much. We have never really enjoyed dinning out. While we love watching films, it just seems more enjoyable at home without all the distractions of fellow movie goers. Work has also kept us rather occupied. I have been working more hours but, the change to an evening shift from a night shift has been so rewarding. I have actually been sleeping. Soundly. At night! What a wonderful experience! I have not had a solid sleep in a succession of nights for 10 years. I had no idea how much I was missing, healthwise, mentally and physically. It's like I have finally emerged from this overwhelming funk. The dogs and I have been walking a lot more. It is at night, after my shift. It is more satisfying for all of us. Very rarily do we encounter other humans. We have come across a variety of wildlife. I have been struggling to explain to the girls, we do not need to befriend every being we see like the skunks and foxes. I really do not need that sort of adventure! With a more restful existence, I've been able to draw and paint more! I missed this! I have been playing more with pastels, charcoals and pencil. 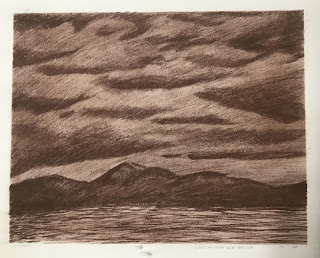 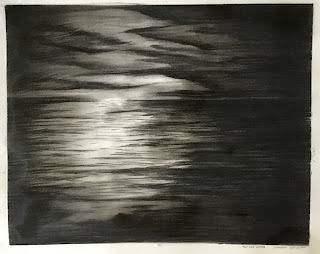 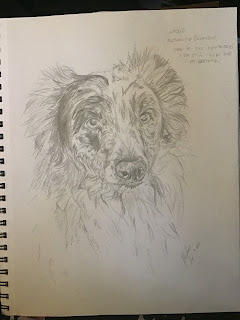 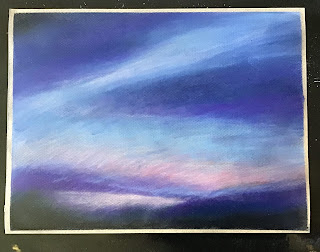 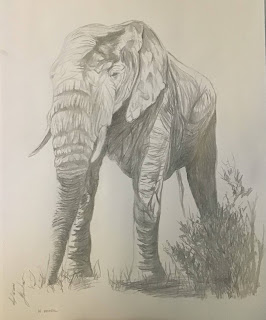 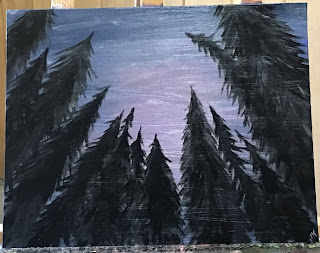 I have also kept up with my knitting. 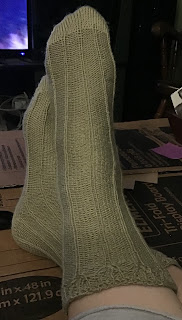 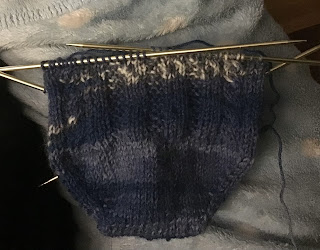 As the clock strikes midnight, we find ourselves a bit sleepy. 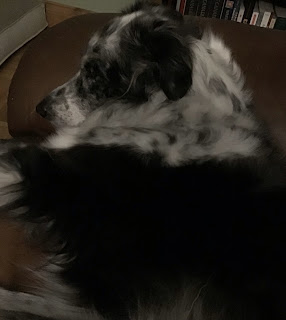 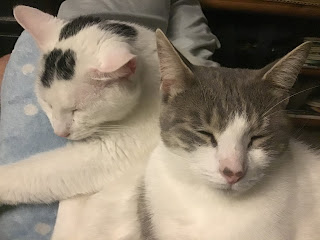 Time to retire. I hope you are all looking after yourselves. Talk again soon!
Posted by Jocelynn at 12:02 AM No comments:

I seem to have taken an unintentional hiatus. A few changes. For the better. As I sit here listening to the rain we desperately needed, I was thinking about them and remembered I've been pretty quiet. A few months ago, I was approached by another nursing home, in need of personal support workers. At first, I declined. I just wasn't ready for any change. I was much too comfortable. A few months passed and I was again asked to reconsider. I thought, why not? I could visit. If it doesn't feel right, I can say thank you but, no. I found my courage, drove to meet the proprietor and decided to see what the vibe was like. It was a good vibe. The proprietor and I got along well and I said yes. Now I work an evening shift and enjoying sleeping at night. After 10 years, it was time! Our garden has produced a wonderful harvest with a surprise as well!

This is a cucuzza. The seeds came in a pumpkin seed packet. Imagine my surprise when all these sprouted! 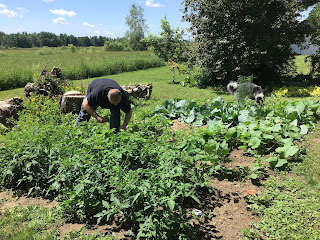 This photo was taken at the beginning of summer. The leaves and vines from the cucuzza travelled quite far. To the chicken coop! My tomatoes also yielded a feast. I have already made and froze three types of sauce, bruschetta and a few BLTs! 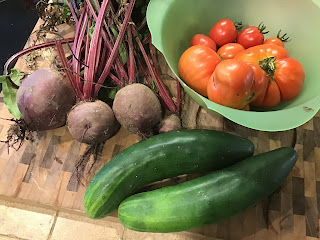 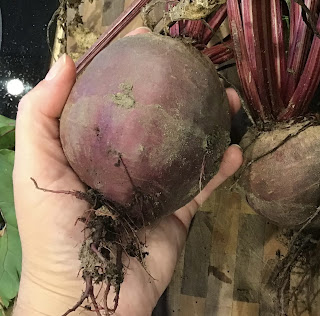 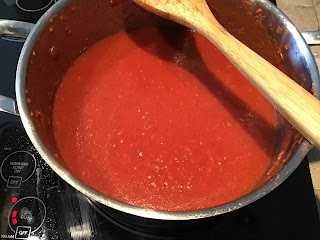 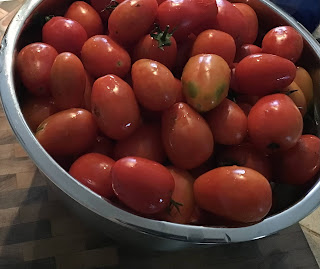 Needless to say, the garden has been a success. My knitting needles have also been clicking away. I finished my Bloody Mary socks! 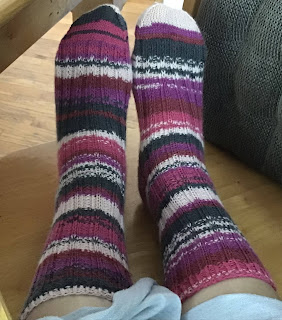 Now I'm working on my Garia socks by Erika Lopez. 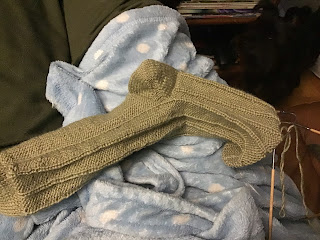 It is actually knit inside out to make it a bit easier. I'm using a yarn by Schachenmayr Regia, Bamboo. It is a very nice yarn to work with and a lovely knit to help decompress. Hubs built me a fantastic cabinet to store all my supplies! 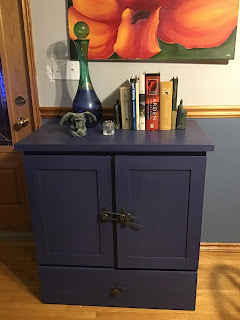 Ignore the child safety lock. It's the only way I have of keeping someone out of my yarn! She may look innocent but, she is actually a ninja! 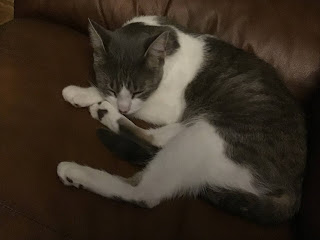 School is going well. It is a bit weird to say I have homework in my 40s but, I enjoy it! I hope you are all keeping well. Just think, Autumn is just around the corner! Take care and talk soon!
Posted by Jocelynn at 11:06 PM No comments:

I recently celebrated my 43rd birthday. That is what started all of the thinking and reminiscing. At this age, my father was diagnosed with Cancer. He died six months later. I have no fear of mortality. I try to do what is right and most of the time, I succeed. When my father was thus age, the world was quite different. Our telephones had cords. Cable was a huge deal. Divorce was an isolating way of life. A woman's worth was whether she could work and be a housewife, quietly. Feminism was really starting to become noticed. I think of all these things and reflect on my life. I'm overall, happy. I have been divorced. I'm nit able to have children. I can pursue whatever career I wish. I have met a lot of people that have made a great impact on my life. I have the relative freedom to do whatever I wish. I believe if my father was still on thus Earth, he would be proud of who I am becoming. I have gone back to school tomearn my BBA. I am doing well in my courses. I struggle but, I am learning all the time. I am so grateful.
Posted by Jocelynn at 12:01 AM No comments: